Peak Tailing – Like an Iceberg, it Hides Signal More than Commonly Perceived 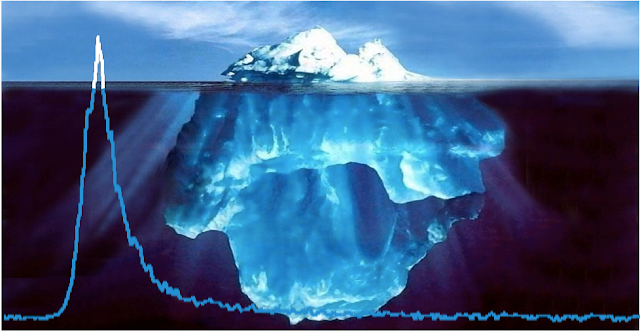 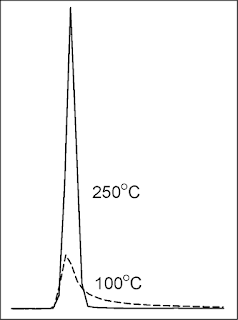 Peak Tailing is something that every chromatographer faces yet its adverse impact is usually underestimated and not properly perceived. A useful discussion with advices regarding peak tailing is found in Restek's ChromaBlography website.

In this Advanced GC-MS Blog post we focus on GC-MS peak tailing and demonstrate how it is eliminated or reduced using the 5975-SMB GC-MS with Cold EI. We found that peak tailing, like an iceberg, is much more harmful than commonly perceived. In GC-MS, peak tailing can originate at the GC column but the main source of the phenomenon is the ion source (an under-heated transfer line induces more peak broadening than asymmetric peak tailing). Column related peak tailing is a known problem, and recently the major GC capillary column vendors significantly improved the column inertness to polar compounds such as bases and free acids via the availability of inert or ultra inert brand columns. However, ion source peak tailing remains a major problem in GC-MS analysis, and like an iceberg it hides behind a minor chromatographic tailing several serious problems including:


Keep reading to find out how the Aviv Analytical 5975-SMB GC-MS with Cold EI helps in the complete removal of ion source peak tailing and degradation while providing enhanced molecular ions and superior signal to noise ratio particularly for polar and difficult to analyze compounds.

Among the GC detectors the mass spectrometer is unique in that its EI ion source temperature is typically lower than the GC oven and sample elution temperatures. The reasons for this relatively low ion source temperature are to suppress ion source degradation, enhance the molecular ions in EI mass spectra and improve the library identification, since the libraries include EI mass spectra that were mostly obtained at low ion source temperatures to improve their quality. Consequently, a sample that elutes at 300ºC GC oven temperature is placed inside the EI ion source with its metallic plates that is typically at 230ºC and the sample starts to experience several lengthy cycles of adsorption and thermal desorption from the cool ion source metal plates that manifest itself as peak tailing. In order to maximize the signal, standard EI ion sources are designed and produced with tiny openings for the electron beam, column and ion exit lens in order to maximize the number of sample crossing trajectories at the active electron ionization volume. We estimate that about 50 intra ion source adsorption desorption cycles are encountered until the sample compounds find their way out of the ion source. Thus, the desire to increase the ionization efficiency actually leads to more pronounced ion source peak tailing, which is further exacerbated by the fact that the ion source surfaces are metallic as they must be electrically conductive despite the fact that metals are known to be effective catalysts of chemical degradation of organic compounds. In addition, the ion source temperature is not uniform and its complex structure results in the fact that the peak tailing is often characterized by a multi exponential decay with a very long and shallow tail. Naturally, ion source peak tailing is far more pronounced with low volatility, thermally labile and polar compounds that are characterized by strong interactions with the ion source metal surfaces.


.
In the upper middle insert figure we show the effect of ion source peak tailing on n-C24H50 in which the change of temperature from 100ºC to 250ºC increases the peak height by about a factor of six. At 100ºC the peak shows a "small" tail but like an iceberg this small tail hides a factor of six reduced peak height which is not easily recognizable via the peak shape.

Accordingly, increased ion source temperature alleviates the problem of ion source peak tailing. However, as demonstrated at the right side of figure 1 the penalty is in exponential reduction of the relative abundance of the molecular ions and for n-C24H50 it is going from 7.5% at 100ºC to 0.4% at 250ºC which is a factor of close to 20 per 150ºC. In addition, the NIST library identification probabilities are reduced with the increase of the ion source temperature from 45.4% to 6.02% and already at 200ºC with 17.8% identification probability the correct compound is not number 1 in the NIST library hit list and therefore cannot be properly identified. In addition, peak tailing increases the analysis RSD. The reasons for this are that it depends on the exact ion source temperature as well as on the ion source surface cleanliness which changes over time. For example, the sample in the first analysis after a few hours or days of idle time finds a clean ion source surface while the next sample will find different surface cleanliness conditions hence the degree of tailing could change from analysis to analysis.

In summary, the ion source temperature should be high enough to prevent ion source related peak tailing, however, increased ion source temperature results in higher internal energy of the molecule and thus lower molecular ion abundance. Consequently, in standard GC-MS there is a basic conflict between peak tailing and molecular ion abundance. As shown below, this conflict is fully resolved when a GC-MS with Cold EI is used.

The best way to eliminate ion source peak tailing is to have a contact-free ion source in which the sample compounds do not scatter from the ion source surfaces. The Aviv Analytical 5975-SMB GC-MS with Cold EI system is based on a combination of an Agilent 5975 MSD with the Aviv Analytical supersonic molecular beam interface and its unique fly-through ion source (GC-MS with Cold EI). In this type of GC-MS ion source peak tailing is fully and inherently eliminated since the sample at the molecular beam flies through the ion source without any contact with its inner surface. In addition, the molecules are ionized by electrons while they are vibrationaly cold (via the supersonic expansion) hence the name Cold EI. As a result, the Cold EI mass spectra are characterized by having enhanced molecular ions.

.
As demonstrated in Figures 4 and 5 above, the Cold EI peak shapes are fully symmetric, as originated via the GC column and without any ion source Peak Tail. Thus, Cold EI is characterized by the following peak tailing related advantages over standard EI.

The ion source peak tailing phenomenon is far more detrimental and widely encountered than commonly perceived. The use of GC-MS with Cold EI such as the Aviv Analytical 5975-SMB fully eliminates this peak tailing hence brings major performance improvements into GC-MS.
Posted by Tal at 1:13 AM