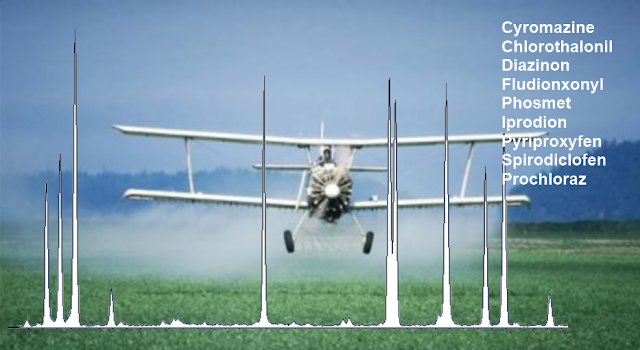 An estimated 2000 chemicals are being used as pesticides worldwide, including banned pesticides and other hazardous chemicals. In view of international food trade this large number implies that pesticide analysis should not be treated as target compounds analysis. Thus, current mass spectrometry instrument development is challenged to provide a one system and method that will be capable of analyzing as many pesticides as possible in full scan mode, in the needed instrumental sensitivity and selectivity in complex agricultural matrices, and in a short amount of time for effective (and lower cost) pesticides screening.
In order to advance towards meeting the above challenges, a GC-MS with Cold EI (EI of Cold Molecules in Supersonic Molecular Beams) was evaluated in the past with pesticide analysis in agricultural products as described in M. Kochman, A. Gordin, P. Goldshlag, S. J. Lehotay and A. Amirav "Fast, High Sensitivity, Multi-Pesticide Analysis of Complex Mixtures with the Supersonic GC-MS" J. Chromatogr. A. 974, 185-212 (2002). Recently, we further evaluated pesticide analysis with the Aviv Analytical 5975-SMB GC-MS with Cold EI (GC-MS with supersonic molecular beam (SMB) interface and its fly through ion source) and developed a method to meet the above challenges.

In the 5975-SMB GC-MS with Cold EI, the GC eluting molecules are mixed with helium make up gas, expand from a supersonic nozzle into a vacuum chamber, vibrationally cooled, skimmed, collimated into a SMB, pass a fly-through electron ionization ion source where they are ionized by 70 eV electrons and mass analyzed. The use of short columns (i.e. 5 meters) and high column flow rates such as 8 ml/min lowers pesticides elution temperatures by over 100ºC, thereby enabling the elution of standard as well as thermally labile "LC pesticides", combined with the provision of enhanced molecular ions to all pesticides and fast analysis of under 10 minutes chromatography analysis time. We note that as explained below enhance molecular ions result in improved selectivity against matrix interference as well as better pesticide identification. In addition, the full elimination of ion source tailing (the analytes fly through the Cold EI ion source without ever touching it) results in uniform, compound independent response, thereby significantly lowering the LOD for difficult to analyze pesticides that are the bottleneck of current GC-MS analysis.
Our proposed 5975-SMB based universal method of pesticide analysis includes the following main attributes:


As above, the use of time programmed SIM is at the heart of our method since it possesses a very important advantage over MS-MS in that it enables simultaneous full scan for obtaining universal pesticides analysis with minimal rate of false negatives via RSIM on the molecular ions of unlimited number of pesticides. While SIM can be operated simultaneously with full scan, MS-MS can not be operated simultaneously with full scan since the time required to remove the CID gas in Q2 is too long, and as a result, MS-MS must be operated as a target compounds oriented method. The above statements does not imply that MS-MS is not useful, it is very useful, and can serve to confirm pesticide findings after their screening to further remove false positives.

Summary of the Universal Method of Pesticide Analysis

System: Aviv Analytical 5975-SMB GC-MS with Cold EI which is based on the combination of Agilent 5975 MSD with the Aviv Analytical Supersonic GC-MS technology (GC-MS with supersonic molecular beam interface and its unique fly-through Cold EI ion source).
Samples: Agricultural products extracts as commonly employed such as QuEChERS or another.
Column: 5 m 0.25 mm ID, 0.25µ film of DB-5MS UI or equivalent.
He column flow rate: 8 ml/min with flow program after 7 min (after the elution of the last to elute pesticide such as Deltamethrin or Prochloraz) to 30 ml/min at 22 ml/min.min.
Injector: 200ºC injector temperatures
Injector liner: Standard 4 mm ID deactivated without glass wool to reduce its surface activity.
Injection volume: 2 µl (can be 1 µl if the extract is concentrated such as with 5g/ml)
Split ratio: Pulsed Splitless injection for 0.3 min at 50 PSIG (48 ml/min).
GC Oven: 60ºC followed by 25ºC/min to 300ºC and wait 0.4 min for total of 10 min. (higher initial temperature with acetonitrile solvent)
Cold EI Ion Source: 12 mA emission, 700 mBar nozzle backing pressure, 60 ml/min total He flow rate (column plus make up at 250ºC transfer line temperature).
SMB transferline temperature: 250ºC with temperature program of 10ºC/min after 5 min to 280ºC.
Electron Energy: 70 eV
Mass Spectral range: 50-550 amu at 2.9 Hz scan rate simultaneous (combined) with SIM of pre-selected molecular ions and their one isotopomers each at several elution time windows. The total SIM time was about as the full scan time.

In Figure 1 we demonstrate our universal pesticide analysis method via the comparison of mass chromatograms of a pesticides mixture obtained by Cold EI (Aviv Analytical 5975-SMB) and Standard EI (Agilent 5973 MSD), and further comparison of a representative Cold EI and Standard EI mass spectra of the last to elute Deltamethrin pesticide. This data clearly demonstrates that Cold EI provides much more uniform response than standard EI, even for difficult to analyze pesticides that are as easy with Cold EI as standard pesticides. The pesticide names are given in the figure and note that three of the pesticides; Captan, Folpet and Prochloraz did not elute in standard GC-MS. These pesticides belong to the group of "LC-MS" pesticides while Captan and Foplet are difficult to analyze even by LC-MS. Thus, "the harder the pesticide analysis the greater is the Cold EI gain due to superior TIC S/N (x3-20) and enhanced molecular ion (~x5), as demonstrated for Deltamethrin. Finally the demonstrated analysis time with Cold EI is about three times faster than with standard EI. We note that a universal method is as good as its bottleneck compounds, thus, Cold EI is far better than Standard EI in pesticide analysis. In Figure 2 we extend the comparison to another GC-MS and pesticides mixture and now the standard GC-MS is a Shimadzu QP 2010 Plus system. In Figure 2 we compare Cold EI and Standard EI mass chromatograms of nine pesticides mixtures at 1 ppm each, and representative Cold EI and standard EI mass spectra of a "difficult" to analyze pesticide Iprodion. The pesticides are listed according to their order of elution in the Cold EI. Note the availability of an enhanced molecular ion for Iprodion and the much better quality of its Cold EI mass spectrum. In addition, Figure 2 (the same as Figure 1) demonstrates much more uniform response of Cold EI for this mixture that includes a few "difficult to analyze" pesticides and over twice faster analysis. Both mass chromatograms are normalized to diazinon which is an "easy to analyze" pesticide.

.
We evaluated the relative sensitivity and limits of detection of the 5975-SMB GC-MS with Cold EI. We found that for easy to analyze pesticides such as diazinon the TIC peak signal to noise ratio is about the same in both systems. However, in RSIM on the molecular ion which is the most selective ion in the MS Cold EI benefits from enhanced molecular ion which for diazinon is a factor of 4.2. As the pesticide becomes harder to analyze the Cold EI sensitivity gain is increased due to its uniform response. An example can be seen in Figure 3 below, in which we compare the analysis of Prochloraz with the 5975-SMB and a Shimadzu QP 2010 Plus system. For a "fare" comparison we did not use the molecular ion m/z=375.1 as it was fully missing in Standard EI (unlike in Cold EI). However, as shown, the Prochloraz RSIM trace on its high mass fragment m/z=308 badly tails in standard EI and as a results it lost about a factor of 7.5 in its TIC signal compared with Cold EI. The software calculated S/N (after file conversion of the Shimadzu data file into Chemstation file (using the MASSTransit file conversion software) showed that Cold EI was superior to Standard EI by a factor of over 20 as the noise level in Cold EI was very low.

.
Another important topic in pesticide analysis is pesticide identification which is discussed by several literature papers. Our approach is to identify the pesticides in their screening via isotope abundance analysis (IAA) in time programmed SIM on the molecular ions and one of its isotopomers. Figure 4 demonstrates the effectiveness of IAA in the case of diazinon and deltamethrin at the level of 80 ng/g in strawberry extract. Unlike other methods, IAA provides objective, machine generated matching factors which if above 800 (a match of 1000 indicates a perfect match) can serve for pesticide identification in addition to the pesticide elution times, the co-elution of the two isotopomers SIM traces and attempted library identification via the simultaneous full scan. 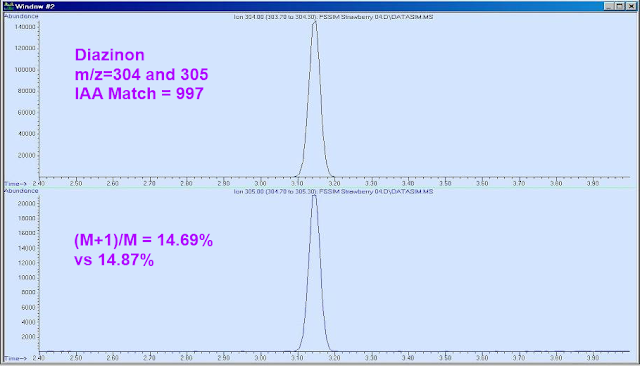 .
Finally, in Figure 5 we further demonstrate the effectiveness of our method in the analysis of an incurred difficult to analyze pesticide such as Iprodion in Strawberry at ~70 ng/g concentration with the 5975-SMB GC-MS with Cold EI, in simultaneous full scan and two ions SIM mode. This Iprodion residue was undetected by standard GC-MS. Note the very high S/N in the SIM trace of 11 pesticides (22 ions in the group). In the SIM trace on either the isolated molecular ion m/z-329 or high mass fragment m/z=314 the RSIM trace was clean. Furthermore, while Iprodion was not identified by the NIST library due to matrix interference, IAA with the TAMI software provided a matching factor of 961 (in the full scan) thus Iprodion was positively identified.