GC-MS with Cold EI (Electron Ionization of Cold Molecules in Supersonic Molecular Beams) provides ideal EI mass spectra which combine the usual library searchable EI fragments with enhanced molecular ions for improved library based identification probability, improved confidence in the sample identity and improved sensitivity and selectivity in the sample analysis. However, in some cases such as in the analysis of complex petrochemical matrices a soft ionization method that provides only molecular ions is desirable since it can generate carbon number distributions for petroleum homologues and since mass spectra with molecular ions only add a dimension of separation that can supplement and complement that of the GC. Field ionization is an example of a soft ionization method that can be combined with GC-MS in which the MS adds another independent dimension of information hence it was named GCxMS (F. C. Y Wang, K. Qian and L. A Green, Anal. Chem. 77, 2777-2785 (2005)). However, field ionization is three orders of magnitude less sensitive than EI, it is incompatible with library based identification, its response can be compound dependent and it may exhibit peak broadening/tailing. While 70 eV Cold EI provides the ideal mass spectra one can use the same fly-through Cold EI ion source at low electron energies in an attempt to observe molecular ion alone. Contrary to some perceptions, for most compounds lowering the electron energies does not affect much the observed EI mass spectra due to electron induced excitation of high lying vibrational states of the ions even at low electron energies. However, hydrocarbons are an example of compounds class that their EI mass spectra are relatively largely affected by the electron energy, and in Cold EI the elimination of internal heat amplifies the low electron energy effect.

We tested low electron energy Cold EI a few times in the past and although the molecular ion was the dominant MS peak we failed to eliminate the fragment ions and get molecular ion only. Thus, we decided to further investigate the reasons for our inability to get molecular ions only. We found that once the sample compound is cooled by the supersonic expansion it can be reheated via reflected scattered helium atoms near the skimmer. Furthermore, once a labile molecular ion is formed it can undergo undesirable collision induced dissociation (CID) the same as in MS-MS, and the magnitude of such CID can be significant for labile molecular ions such as of hydrocarbons. In order to reduce these adverse effects we evaluated the effect of reduction of helium pressure at the ion source and MS vacuum chamber via the increase of the nozzle-skimmer distance. We found out that this increased nozzle-skimmer distance resulted in noticeable increase of the ratio of molecular ions to low mass fragment ions.

Keep reading to find out how the Aviv Analytical 5975-SMB GC-MS with Cold EI uniquely improves low electron energy Cold EI and converts it into a Soft Cold EI while further approaching the ideal of molecular ion only ionization method.


In this article we demonstrate recent improvement that we achieved with our Cold EI (EI of vibrationally cold molecules in supersonic molecular beams) and our further advance in having Soft Cold EI at low electron energies that further approaches the status of mass spectra with molecular ions alone. 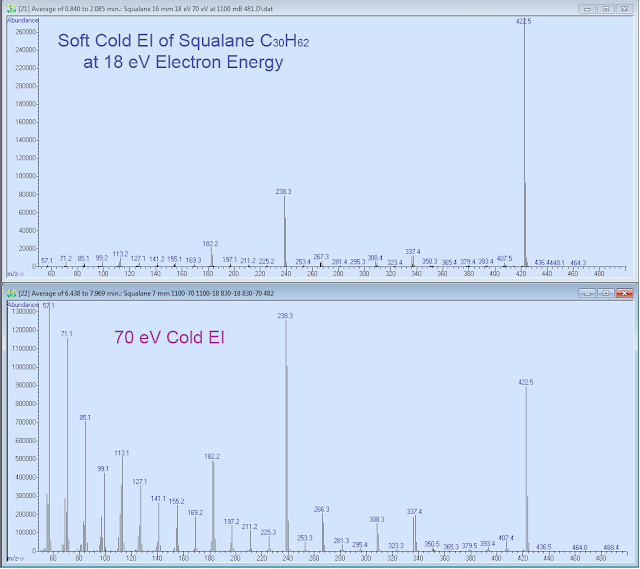 .
In order to differentiate the relative roles of CID from skimmer induced reheating we explored Soft Cold EI and Cold EI of PFTBA. This compound that serves for MS tune in GC-MS is unique in two aspects: a) Its cooling effect in Cold EI is small and; b) Its m/z=264 fragment ion is relatively stable in MS-MS based CID while its abundant m/z=219 fragment ion is weak and easily dissociates into m/z=131 and 69 daughter ions. In the NIST library the ratio of m/z=264/219 ratio is 17% in the main library MS while in the replica it can be up to 26%. In Cold EI with nozzle-skimmer distance of 16 mm and 84 ml/min helium make up gas flow rate we found that the ratio of m/z=264/219 is 25% while at 7 mm nozzle-skimmer distance it was 28%. Under these conditions the m/z=131/219 ratio increased from 31% to 45%. While such increase in the m/z=131/219 can be explained by both increased CID and skimmer induced heating, the increase in the m/z=264/219 must originate only from CID as skimmer induced heating should slightly reduce this ratio.

GC-MS with Cold EI uniquely provides full control over the electron ionization mass spectrum. With the Aviv Analytical 5975-SMB GC-MS with Cold EI one can easily change (few minutes method change) the operation of the ion source and SMB interface and obtain the following three main modes of operation and their resulting types of mass spectra:
In 1995 Shai Dagan and Aviv Amirav published their paper "Electron Impact Mass Spectrometry of Alkanes in Supersonic Molecular Beams", J. Am. Soc. Mass Spectrom. 6, 120-131 (1995). In this article GC-MS with Cold EI analysis of hydrocarbons was demonstrated and discussed for the first time. Since that time we improved the vibrational cooling with a shaped nozzle and combined the Cold EI technology with advanced commercial GC-MS systems such as the Agilent 5975 or 5977 MSD. In this article we explored our new discovery that the softness of Cold EI mass spectra can be further improved via the reduction of both skimmer re-heating effects and collision induced dissociation of the molecular ion after its formation. We demonstrated our improved Cold EI via the Soft Cold EI mass spectra of squalane and n-C24H50 which demonstrated highly dominant molecular ions at 84 ml/min helium make up gas flow rate, 16 mm nozzle-skimmer distance and 18 eV electron energy. As demonstrated above, we further approached the ideal of molecular ion only and for n-C24H50 we obtained a molecular ion that was over 50 times higher than any fragment ion and which amounted to 67% of the total ion count. We tested also lower than 18 eV electron energies but found only little further increase in the ratio of molecular ion to residual fragment ions while the ionization yields were markedly reduced. It should be emphasized that in standard EI the reduction of the electron energy has only limited effect on the enhancement of the molecular ion, and the bigger the compound the lower is the low electron energy effect due to increased internal heat capacity. In contrast, in Cold EI once the intra-ion thermal energy is removed, the reduction of electron energy induces much greater effect and the bigger the compound the greater is the effect of vibrational cooling in Soft Cold EI on the enhancement of the molecular ions.

Based on our experiments with PFTBA (and further additional indirect evidence) we conclude that CID is an active mechanism that explains the further enhancement of molecular ions at increased nozzle-skimmer distance in both Cold EI and Soft Cold EI. On the other hand, skimmer induced heating effect may or may not be active and it cannot be ruled out.
As described above, the conversion of Cold EI into Soft Cold EI requires three changes of:

We note that Soft Cold EI is now closer to field ionization in the production of molecular ions alone since even field ionization can exhibit fragment ions (E. M. Chait and F. G. Kitson, Org. Mass. Spectrom., 3, 533 – 547 (1970)). However, in comparison with field ionization Soft Cold EI is two orders of magnitude more sensitive, Soft Cold EI can be changed in few minutes via a method change into Cold EI (or Classical EI-SMB) for NIST library compatibility, the response of Soft Cold EI is uniforms and compound independent, it does not exhibit any peak broadening/tailing and its fly-through ion source is highly robust and rarely require any service. Another soft ionization mode is chemical ionization (CI). However, CI is not as soft as Soft Cold EI and Cold EI shows molecular ions to broader range of compounds unlike CI which is incompatible with certain classes of compounds such as hydrocarbons. In addition, Cold EI is far more sensitive than CI and unlike CI is compatible with NIST library based sample identification. CI requires system venting to replace the ion source hence it is rarely used while the Cold EI ion source has three modes of operation that can be changed via a few minutes method change. Furthermore, CI requires more frequent cleaning and service and its closed ion source induces earlier onset of ion source peak tailing and degradation while Cold EI and Soft Cold EI significantly extend the range of compounds amenable for GC-MS analysis to include much bigger and more thermally labile compounds. Thus, Cold EI provides the most sensitive most selective and most informative mass spectra and contrary to some perception it improves the NIST library identification probabilities.

We believe that with such great flexibility of the Cold EI fly-through ion source it should bring the next GC-MS revolution as Cold EI has only advantages over standard EI and with it there is no reason to have a standard EI ion source.