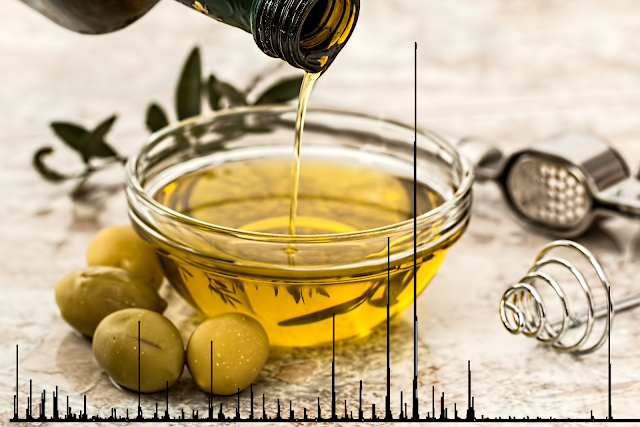 Triglycerides analysis is challenging since these large compounds do not elute from standard GC columns under the conditions used in GC-MS and furthermore their standard EI mass spectra do not exhibit any molecular ion, as shown in the NIST library. In addition, their analysis by LC-MS is also challenging in view of their poor proton affinity. Thus, and in view of the importance of triglycerides analysis we decided to analyze three oil samples that were previously analyzed by GC-FID in order to evaluate these oils analysis by GC-MS with Cold EI. The challenge was to properly elute these large compounds and demonstrate the availability of abundant molecular ions plus useful and informative high mass fragments. Triglycerides analysis is very important for the food industry and such analysis can also be potentially important for human medical diagnostics in the form of cholesterol and triglycerides analysis in blood. Currently triglycerides are hydrolyzed and methylated to form FAMEs (fatty acid methyl esters) that are analyzed by GC-MS. However, in such analysis vital information is lost on the actual structure and concentration of the various parent triglycerides and GC-MS with Cold EI is challenged to exhibit such information.

GC-MS with Cold EI System: 5975-SMB GC-MS with Cold EI system of Aviv Analytical, based on the combination of an Agilent 5975 MSD (and 7890A GC) with the Aviv Analytical supersonic molecular beam interface and its fly-through ion source. The system used has a five years old fly-through ion source that was never serviced and which still uses its original filament and ion cages. The system was operated by Aviv Amirav.
Samples: Three oil samples were analyzed of: a) MCT oil (medium chain length triglycerides); b) Interesterified Palm oil; c) Olive oil. We received these oils in neat conditions in which oils a) and c) were liquids while oil b was a white soft waxy material. We diluted the oils to be at 0.3% (3 mg/ml) in hexane and we also made 0.6% sample from the interesterified Palm oil.
Injection: 1 or 2 µL at 300ºC split splitless injector temperature with split ratio of 9:1 thus ~300-600 ng oils were injected on column (1200 ng in one of the Palm oil).
Column: 15m length, 0.32 mm ID and 0.1 µm DB1HT film was used.
He column flow rate: 8 ml/min for 12 min and then flow program up at 3.2 ml/min.min to 24 ml/min column flow rate and hold at 24 ml/min for 3 minutes. The use of high column flow rate with flow program was essential to elute the large triglycerides. Alternatively, we used higher GC oven temperatures up to 380°C but it resulted in having higher column bleed thus upper GC oven temperature of 350°C and column flow program were preferred.
Oven: 70ºC followed by 20ºC/min to 350ºC and wait 6 min for the total run time of 20 minutes. This run time is considered as fast for such analysis.
Cold EI Source: 7 mA emission, 70 eV (18 eV was also used once and showed no gain) electron energy, 60 ml/min He makeup flow.
Transfer line temperatures: It was 250ºC for 4 min followed by temperature program at 12°C/min to 350°C and wait 7.7 min.
Mass spectral range and scan speed: 50-1040 amu at about 1.9 Hz scanning frequency.

Summary of the results

The three oils samples were analyzed and Cold EI demonstrated its usefulness in the following aspects:
In the nine figures below we demonstrate our findings and further discuss them.