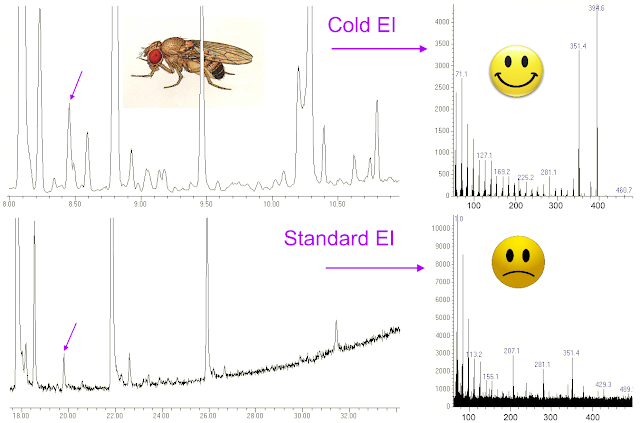 Insects such as flies, ants and mosquitoes express species-specific blends of cuticular hydrocarbons (CHCs) on their surface that serve as pheromones and play an important role in their behavior and communication. In view of growing interest and importance of this research area recently several advanced tools were developed for improved CHCs analysis. However, one major limitation of these methods and instrumentations is that alkanes cannot be properly detected via some of the atmospheric pressure ionization ion sources while in standard electron ionization as used with GC-MS the molecular ion is often very weak or altogether missing thereby proper identification is hindered. Furthermore, standard GC-MS is limited to relatively small compounds up to about C40-C44. Thus, we explored the chemical structure of fly and mosquito waxes with the Aviv Analytical 5975-SMB GC-MS with Cold EI which significantly enhances the molecular ion abundances, amplifies and exposes isomer structural mass spectral effects and enables the elution of much larger hydrocarbons via the use of short columns with high column flow rates. In addition, it provides uniform response for accurate quantification of the waxes compounds which is superior to standard EI and in contrast to API ionization methods (APCI, DART MALDI etc). For further information on GC-MS with Cold EI please read the review article A. Amirav, A. Gordin, M. Poliak, T. Alon and A. B. Fialkov "Gas Chromatography Mass Spectrometry with Supersonic Molecular Beams" J. Mass. Spectrom. 43, 141-163 (2008)., which is available on request. In this post we report on the analysis of two fly samples. A) Male Drosophila melanogaster, and B) Male Drosophila mojavensis.

We believe that Cold EI is currently the most informative ion source available for the analysis of cuticular hydrocarbons, pheromones and lipids from living insects. Thus, it can serve as a step forward towards comprehensive hydrocarbon analysis and for advance entomology research. Further information is given in the figures and their captions below.