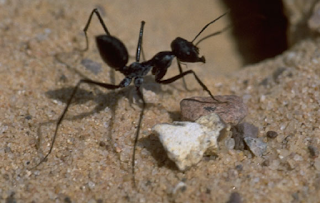 Ants are social insects and thus the exploration of their ways of communication is an interesting research area. For example, nestmate recognition is essential for ants for the defense against exploitation of nest resources, and such recognition is largely mediated by chemical signals. When two individuals meet they match the label, the chemical signal it carries on the epicuticle and represents the colony odor, with a postulated neural template present in the brain. If the label matches the template amicable interactions between the individual ensue, (photo in the graphical abstract) otherwise they engage in aggressive interaction. Since the ant wax is composed mostly from saturated hydrocarbons, both linear chain and their branched isomers, we decided to explore the chemical structure of ant waxes with the Aviv Analytical 5975-SMB GC-MS with Cold EI which significantly enhances the molecular ion abundances and amplifies isomer structural mass spectral effects. We studies Cataglyphis ants from 17 different nests in various locations in Israel and found that although morphologically they are practically indistinguishable, isomer distribution analysis found significant differences between cryptic ant species or ants from different nests. Thus, the data strongly supports the hypothesis that ant communication is based on branched hydrocarbon abundances as a recognition fingerprint.

Keep reading how the 5975-SMB GC-MS with Cold EI helps in ant communication research and to view the important role of isomer distribution analysis in our findings.
Analytical conditions summary:

We analyzed 17 Cataglyphis ant waxes that were collected from 17 different locations in Israel. The total ion mass chromatograms showed three zones of free fatty acids, hydrocarbons and large compounds. The free acids were amenable for analysis by the 5975-SMKB GC-MS with Cold EI in view of the fact that the use of fly through ion source eliminated their ion source peak tailing. While the acids contained valuable information the hydrocarbons in the Cataglyphis ants are considered as its most informative zone. The discussion of the large compounds zone of compounds in the molecular weight range of 500-800 amu is beyond the scope of this post.

In conclusion, we believe that the GC-MS with Cold EI opens the door for advanced Chemical Ecology and Entomology research and in this post we demonstrated its power in the first time demonstration of the important role of isomer distribution analysis for ant communication and recognition.