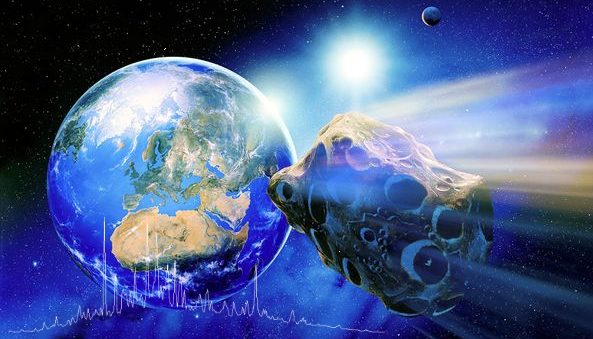 The Allende meteorite is the largest carbonaceous chondrite ever found on Earth. It fell on February 8, 1969, near the village of Pueblito de Allende in the state of Chihuahua Mexico. The original stone is believed to have been approximately the size of an automobile traveling towards the Earth at more than 10 miles per second. After breaking up in the atmosphere, it produced thousands of fusion crusted individuals and an extensive search for pieces was conducted which led into what is often described as "the best-studied meteorite in history". The Allende meteorite contains about 4% carbonaceous chondrites. The subject or organic compounds in meteorites was investigated by several authors [1-3] and for example the organic compounds of the Allende meteorite were analyzed by photoionization combined with TOF-MS and some PAHs compounds such as phenanthrene and pyrene were found [3].

Allende Meteorite sample was provided to Prof. Aviv Amirav by Prof. Richard Zare from Stanford University during the Isranalytica 2010 meeting in Tel Aviv in January 2010. The meteorite small stone was broken with a clean tweezers into small (about 1 mm diameter) stones and it was analyzed via the use of ChromatoProbe sample introduction device for intra injector thermal extraction followed by 5975-SMB GC-MS with Cold EI analysis.

System: Aviv Analytical 5975-SMB GC-MS with Cold EI system that is based on the combination of an Agilent 5975 MSD with the Aviv Analytical supersonic molecular beam interface and its unique fly-through ion source (GC-MS with Cold EI). The technology of GC-MS with Cold EI is reviewed in reference 4.
Sampling: Aviv Analytical CPAV7890 ChromatoProbe sample introduction device at 250ºC injector temperature.
Sample: Allende Meteorite as given (handed) by Prof. R.N. Zare.
Column: 28 m 0.25 mm ID, 0.25µ film DB-5MSI
He column flow rate: 5 ml/min during injection with flow programming down to 1 ml/min and after 20 min up to 5 ml/min above 250C GC column oven temperature.
Injection volume: about 1 ul solid meteorite inside the ChromatoProbe
Split ratio: Splitless for 1 min than split gas flow rate of 100 ml/min
On column amount: Estimates as ~5-10 µg of thermally extracted sample.
Injector temp: 250ºC
GC Oven: 50ºC for one minute followed by 10ºC/min to 320 and wait 4 min for total time of 32 min.
Flow program: was used from 5 ml/min for 1 min to 1 ml/min and 1 ml/min.min flow program above 20 min to 5 ml/min. The flow rate has no effect on tune or sensitivity thus flow programming can be uniquely used.
SMB source: 4mA emission, 90 ml/min He makeup flow.
SMB transferline temperature: 250ºC and temperature programmed at 10ºC/min to 300ºC after 20 min.
Electron Energy: 70 eV Cold EI
Mass Spectrometer: Scan range 50-700 amu at 2 Hz

The Allende meteorite sample showed a unique yet diversified amount of hydrocarbons. Its organic matter was grouped in a narrow range of carbon size and each main compound was distributed among many isomers. We did not find any standard PAHs in the sample. However, the majority of hydrocarbons in the sample seem to be highly unsaturated hydrocarbons with several such as five degrees of unsaturation and/or rings. The most abundant compound in the sample is with molecular weight of 272.3 in its various isomers and one conjectured structure is given below based on NIST library attempted identification of the main m/z=272 peak at 18.24 min elution time as Kaur-16-ene, (8á,13á). 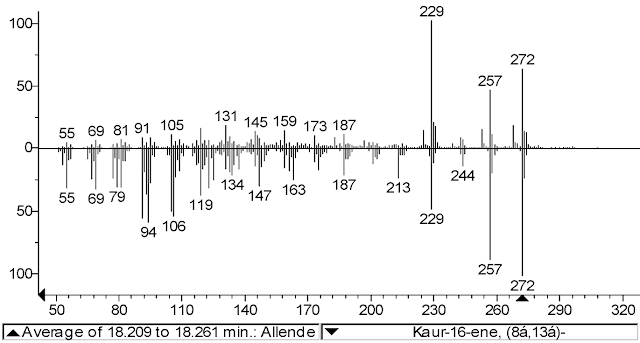 Our opinion is that this sample is authentic. This mixture represents an estimated almost 1% of Allende organic material and it is a unique mixture which is focused around majority of C20 compounds and isomers (m/z=268-274). C20H32 alone exhibited well over 20 isomers. Furthermore, the fact that different meteorite pieces exhibited similar but not identical chromatograms hints towards extraterrestrial origin as terrestrial origin contamination should give homogenous one mixture source while extraterrestrial source could be non uniformly changed by heat during entrance to earth.

If this is truly extra terrestrial matter it could hint to extraterrestrial plant origin since these compounds could originate from terpene chemistry as on earth. However, this conclusion must be supported by additional evidence.

In this analysis the 5975-SMB GC-MS with Cold EI provided a wealth of identification information and based on its provision of enhanced and trustworthy molecular ions to all hydrocarbons, including highly branched isomers, we could uniquely demonstrate the importance of isomer distribution analysis. The Cold EI data file is available for further data analysis upon request.