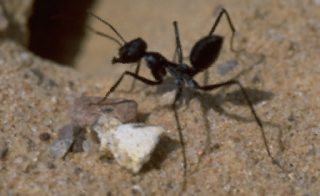 Ants represent an interesting example of social insects and thus the chemical composition of their epicuticle is widely explored including in order to learn about the way they communicate. Much of the chemical ecology research of ants is focused on their wax hydrocarbons structure. In a previous post we described the results of our study of Ants Communication Exploration via their Wax Analysis by GC-MS with Cold EI – The Unique Role of Hydrocarbon Isomer Distributions.
As often the case, when new and powerful equipment is being used new discovery are being found as described in this post. We followed our exploration of the chemical structure of Cataglyphis ant waxes with the Aviv Analytical 5975-SMB GC-MS with Cold EI via sampling with the CPAV7980 ChromatoProbe sample introduction device. The ChromatoProbe allowed us to introduced ants body parts and glands without any sample preparation for their intra injector thermal extraction combined with GC-MS with Cold EI analysis with its features of having significantly enhanced molecular ion abundances, amplified isomer structural mass spectral effects and the ability to have tail free GC-MS analysis of underivatized free fatty acids.

Keep reading how the 5975-SMB GC-MS with Cold EI in combination with the CPAV7890 ChromatoProbe brings new, untapped and important chemical information about ants wax composition. 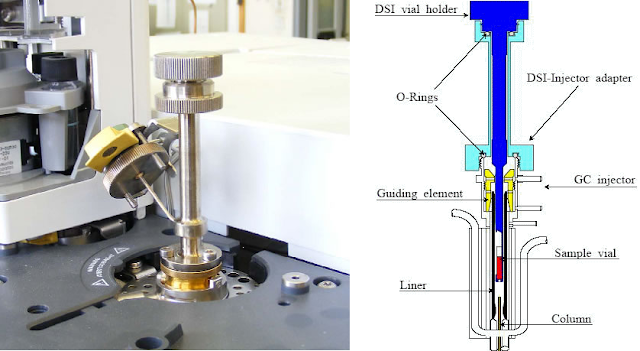 The ChromatoProbe device is aimed at bringing solids, sludge and other dirty samples into the GC injector in a small vial for their intra injector thermal desorption (extraction). Its first name was direct sample introduction device (DSI) and later named ChromatoProbe. It is sold by Aviv Analytical as its models CPAV7890 and CPAV6890 ChromatoProbe. A photo of the Aviv Analytical CPAV7890 is shown above (left photo) together with its schematic diagram (right). More information on the ChromatoProbe, its method of operation and over 100 literature references can be found in Professor Amirav's ChromatoProbe website.
The ChromatoProbe enables thermal extraction which include all the ant head sufficiently volatile compounds (at the injector temperature) regardless their polarity, while solvent extraction could be biased according to the sample solubility which can be poor for example for acids in hexane. In addition, the dirt and leftover ant head remains in the vial and is discarded after the analysis without leaving any deposit on the liner and or column, which is important for free acids analysis.

It is important to mention that the ChromatoProbe sampling of polar compounds is followed by the use of the 5975-SMB GC-MS with Cold EI with its fly-through ion source which can serve for the analysis of underivatized free fatty acids without the standard ion source compound dependent tailing and decomposition. Only column related tailing is possible if the column is not in good condition as well as earlier onset of peak fronting due to lower column sample capacity for polar compounds. Thus, we used an ultra inert column for the elimination of column related tailing.

We analyzed several Cataglyphis ant body parts and glands and in this post we focused on the ant head compounds analysis results since they are the most novel. We found that the ant head uniquely includes a large number of organic esters and that each ester included several isomers. We also found that the ant heads included a relatively large proportion of free acid and that most of these free acids were branched isomers as well as linear chain. We also found for the first time several steroid based free acids, again, in the form of few isomers.

We conclude that it seems that the ant chemistry is based on having a plurality of isomers which probably serve in their metabolism and possibly plays a major role in their communication.