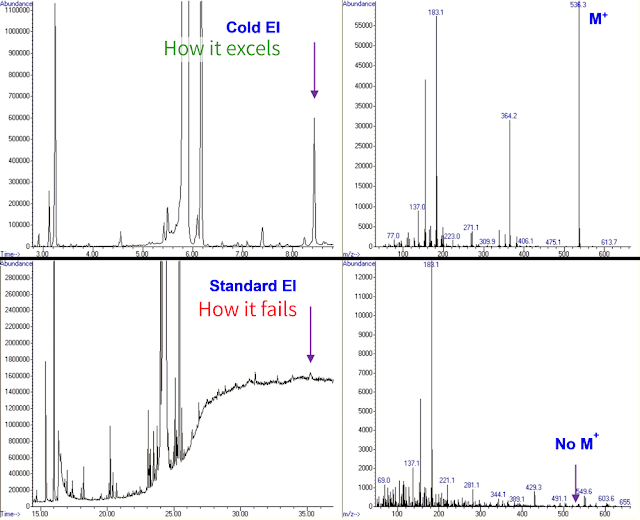 A Permethrin impurity was successfully analyzed by GC-MS with Cold EI after it failed to be analyzed by GC-MS with standard EI. In this application note we demonstrate and discuss the ways GC-MS with standard EI analysis of relatively large compounds gradually becomes more difficult as the sample compound size is increased due to reduced total ion count signal, reduced molecular ion relative abundance and increased noise. Accordingly, as the analyzed sample compound becomes larger its GC-MS analysis becomes harder in a gradual fashion until it fails. In contrast, GC-MS with Cold EI can analyze twice larger compounds and thus significantly extends the range of compounds amenable for GC-MS analysis.

Permethrin (C21H20Cl2O3) is both a medication and insecticide. As a medication it is used to treat scabies and lice. A local pharmaceutical company communicated with us with the request to analyze an impurity compound in Permethrin active pharmaceutical ingredient that failed to be analyzed by standard GC-MS or by any other means including LC-MS. The analysis target was to identify an unknown impurity that eluted at about 1.7 times the retention time of Permethrin in GC-FID chromatogram and to provide its molecular ion and structural information. Additional target was to attempt to get elemental formula for this impurity.

As shown below, Permethrin was successfully analyzed by GC-MS with Cold EI, and its impurity was clearly identified with molecular weight of m/z=536.3 and its elemental formula was assigned as C33H44O6. This information plus additional Cold EI fragmentation pattern information and the known synthesis reactants and its possible pathways were used by the synthetic chemist to get the structure of the impurity. This important impurity structure information helped to remove or largely reduce the concentration of this drug impurity.

Summary of the Results

In order to compare Cold EI with Standard EI we injected the same sample with split 10 (estimated 200 ng on-column). The results are shown in Figure 1 and are summarized below:

Cold EI uniquely provided the following information:
Discussion and the Road to Failure by GC-MS with Standard EI

The following are the various (thirteen) GC-MS performance aspects that affect the analysis, the gain factors of Cold EI versus standard EI and the reasons why the performance of standard EI is poor for this impurity compound:
In Figure 2 we show our own illustration description of the average total ion count and molecular ion intensity dependence on the sample compound mass for standard EI and for Cold EI. While this information is generally known to most GC-MS users we are not familiar with any literature discussion of it.

The following are the major physical parameters that affect the GC-MS performance dependence on the sample mass:
In conclusion

Standard EI was useless for the analysis of the explored Permethrin impurity while Cold EI was useful for this analysis. As the sample molecule size is increased its standard EI TIC signal is reduced while the baseline noise is increased and the molecular ion relative abundance is exponentially reduced until one reaches failed analysis. While for Octafluoronaphthalene and other similarly easy to analyze compounds (by GC-MS) the signal to noise ratio can be a few thousands for one pg in RSIM on the molecular ion, for the Permethrin impurity it was well below 1 for 3 ng thus demonstrating about seven orders of magnitude sensitivity decline for large and harder to analyze sample compounds. In contrast, in GC-MS with Cold EI the various performance aspects are about sample size independent up to about doubled size compounds versus GC-MS with standard EI. Consequently, GC-MS with Cold EI significantly extends the range of compounds and applications amenable for GC-MS analysis and thus can increase its total use and market.