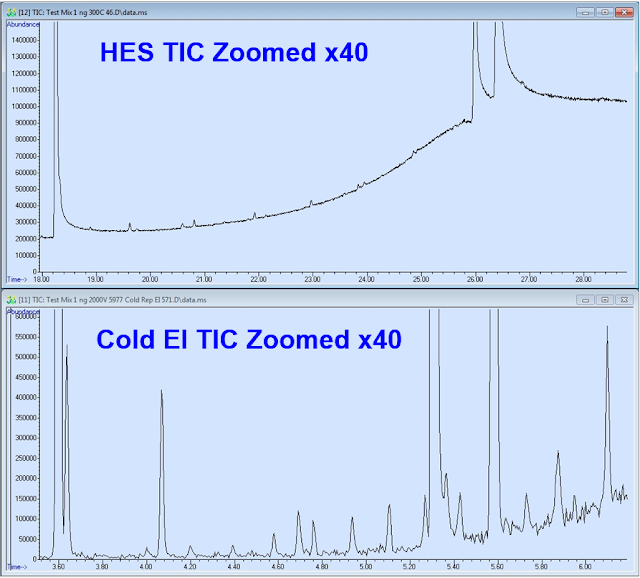 
GC-MS sensitivities are specified with octafluoronaphthalene (OFN). However, for many GC-MS users the most important operational parameter is the sample limits of identification. We compared the Aviv Analytical GC-MS with Cold EI with the Agilent 5977B GC-MS with high efficiency ion source (HES) in sample identification. We found that Cold EI far outperforms the 5977B-HES in both detection and identification limits. Cold EI detected and identified thirteen impurity compounds in a given test mixture while the HES standard EI failed to detect most of these impurities and failed to identify any of them. In this article we demonstrate and discuss several Cold EI benefits of superior sensitivity, better identification capability, greater range of compounds amenable for analysis and faster speed of analysis. The graphical abstract figure above demonstrates the absence of impurity peaks in the TIC with HES versus at least thirteen detected peaks in Cold EI in which each peak exhibits a molecular ion and is amenable for trustworthy identification.


GC-MS are specified today for their limit of detection (LOD) which is typically at the low and even sub one femtogram for octafluoronaphthalene (OFN) as measured via single ion monitoring (SIM) or full scan with reconstructed single ion monitoring (RSIM). On the other hand, the GC-MS limit of identification (LOI) is ignored although GC-MS is typically used for sample identification and its major strength over LC-MS is in having automated identification capability with names and structures via the use of the EI libraries such as NIST.


Achieving low limit of identification is far more demanding than low limit of detection since identification requires: a) Detection of the sample compound as a peak in the total ion mass chromatogram (TIC) which already is in the pg range; b) Having appropriate separation of the sample compound from other compounds; c) Having good ratio of peak to vacuum background and column bleed interferences; d) Having a trustworthy molecular ion; e) Having informative mass spectral fragment ions for good library based identification and/or structural information, particularly if the compound is not in the library.


GC-MS Systems: A) The Agilent 7890B + 5977B-HES system that was used is a new 5977B with HES ion source that is working about one month with its initially provided and assembled HP5MS column. The 5977B-HES passed all its installation OFN specifications and shortly after that we achieved with it impressive OFN LOD of 0.2 fg in SIM mode. B) 5977-SMB GC-MS with Cold EI system of Aviv Analytical, based on the combination of an Agilent 5977A MSD (and 7890B GC) from 2014 with the Aviv Analytical supersonic molecular beam interface and its fly-through ion source. The system used has a three years old fly-through ion source that was never serviced.
Sample: Aviv Analytical standard test mixture sample with 10 ppm each n-C16H34, methylstearate, cholesterol and n-C32H66 in hexane. This test mixture was custom made for us by Restek at 1000 ppm concentration and was home diluted to 10 ppm as above. Most of the identified impurities were incurred in this test mixture.
Injection: 1 µL at 260ºC injector temperature and split 10 using the Agilent auto-sampler. The liners were 4.0 mm I.D. Agilent ultimate inert with gooseneck and glass wool.
Columns: In the 5977B-HES it was 30 m long, 0.25 mm I.D. and 0.25 µ HP5MS film while in the Cold EI system it was 15 m, 0.32 mm I.D. and 0.1 µ DB1HT film.
He column flow rate: 1.2 min in the 5977B GC-MS with HES and 8 ml/min with the 5977-SMB GC-MS with Cold EI system.
GC Oven: For the 5977B-HES it started at 50ºC followed by 10ºC/min to 300ºC and wait 4 min for the total run time of 29 minutes. In the 5977-SMB GC-MS with Cold EI the temperature program start was 50ºC, its program rate was 40ºC/min and upper GC oven temperature was 300ºC for 1.75 min for the total of 8 min analysis time.
Cold EI Source: 7 mA emission, 70 eV electron energy, 60 ml/min He makeup flow.
5977B-HES EI ion source: The Agilent HES was auto-tuned and operated at 70 eV with 100 µA emission current. The HES ion source temperatures was 300ºC (Cold EI has no relevant source temperature).
Transfer-lines temperature: 300ºC for the 5977B-HES systems and 250ºC with temperature program after 4 min at 10ºC/min to 270ºC for the 5977-SMB system.
Mass spectral range: 50-500 amu at about 3.2 Hz scanning frequency.
Precautions: Exactly the same sample and vial were used in both systems, injections were automated in both cases with the same model of Agilent small autosampler, the washing solvents were fresh, each experiment was repeated several times, we injected blank samples, we also used both higher split ratio of 40 and splitless injections and we also evaluated the data with other GC-MS systems such as an older 5975-SMB GC-MS with Cold EI and a 5977 with standard EI with Inert ion source.
Results

In Figure 3 below we zoom on the mass chromatograms of Figure 1 and 2 around the elution times of cholesterol and n-C32H66. As demonstrated, the HES mass chromatogram has no additional peaks of those sample compounds with low abundance and it is characterized by high degree of ion source related peak tailing that severely erode the separation, reduce the TIC signal and hampers the identification capability. In contrast, the Cold EI mass chromatogram reveals three sample compounds with low abundances of n-C30H62 (left of the cholesterol peak, cholestenone (also named cholesterone) at the right side of cholesterol and n-C31H64 before the big n-C32H64 peak. This is a clear demonstration of the superiority of Cold EI over standard EI (even with the HES) in sample identification. The hydrocarbons are easily identified via their molecular ions and the fragment ions indicate that they are linear chain hydrocarbons and not brunched isomers. In cholestenone the identification is not with full confidence but we know that the sample compound molecular ion is 384.3 which could be cholesterol with a loss of two hydrogen atoms thus tentatively assigned as the cholestenone steroid.

In Figure 4 we show the Cold EI mass spectra of hexadecanamide, n-C29H60 and Irganox 1076 as obtained from the indicated small TIC peaks shown in Figure 2. The structures shown were taken from the NIST library. The estimated (assuming response uniformity with Cold EI) on-column amount of hexadecanamide is about 30 pg, that of n-C29H60 is ~6 pg and that of Irganox 1076 is ~24 pg. We note that these identifications were achieved at very low sample compounds levels yet due to the enhanced molecular ions and identification capabilities of Cold EI these identifications are with high confidence levels. Hexadecanamide was identified by the NIST library as #2 with 30% identification probability while its isomer Isobutyramide, N-dodecyl was rated as number 1 with 48% identification probability.

We are unable to properly differentiate between these two isomeric compounds and such isomer differentiation is the "final frontier" of sample identification. We note that at the Chemspider website we can find for the elemental formula C16H33NO of hexadecanamide a staggering number of 2907 isomers. n-C29H60 was identified by the NIST library as #4 in its list but the first 3 could be easily ruled out and the availability of its molecular ion at m/z=408.4 (high 0.4 amu mass defect) highly supports this identification and the range of fragment ions at the usual CnH2n-1 masses further confirms this identification. Irganox 1076 was not initially identified as we used upper mass range of 500 amu. However, since in Cold EI we expect to have abundant molecular ions and due to the late elution time we realized that we need to increase the upper mass range to 600 amu. With this mass spectral range we obtained dominant molecular ion and NIST identification probability of 97.1% and thus identification is assured.

We can divide the "impurities" into five groups of compounds in terms of identification:
Conclusions and discussion

In this paper we compared GC-MS with Cold EI and GC-MS with the most advanced standard EI ion source in the form of the Agilent 5977B with the HES ion source. As demonstrated, Cold EI far outperforms the HES in sample detection and identification. The test mixture used included four major compounds at the on-column level of 1 ng each and a range of unintended impurities that their detection and identification served for this performance comparison.
Sample identification is more challenging than detection yet it is usually ignored despite its importance as a performance capability. Sample identification requires: a) Detection of the sample compound as a peak in the total ion mass chromatogram; b) Having appropriate separation of the sample compound from other compounds; c) Having good ratio of the identified peaks to vacuum background and column bleed interferences; d) Having trustworthy molecular ions; e) Having informative mass spectral fragment ions for good library based identification and/or structural information if the compound is not in the library. We found that in all these five aspects Cold EI outperforms standard EI in the form of high efficiency ion source (HES) since:
Accordingly, Cold EI far outperforms the 5977-HES in sample identification and in this paper we described how GC-MS with Cold EI serves to achieve the lowest limits of identification.
In this paper we also demonstrated several additional benefits of Cold EI in which it is better than standard EI including the ten features below:
Thus, contrary to some incorrect perception Cold EI is not just a method to enhance the molecular ions but it is a superior GC-MS technology in all aspects and its most important benefit is the extension of range of compounds amenable for analysis thereby closing the gap between GC-MS and LC-MS. Accordingly, if Cold EI will be adopted by the major vendors it will bring the future GC-MS revolution.
Posted by Tal at 12:16 PM